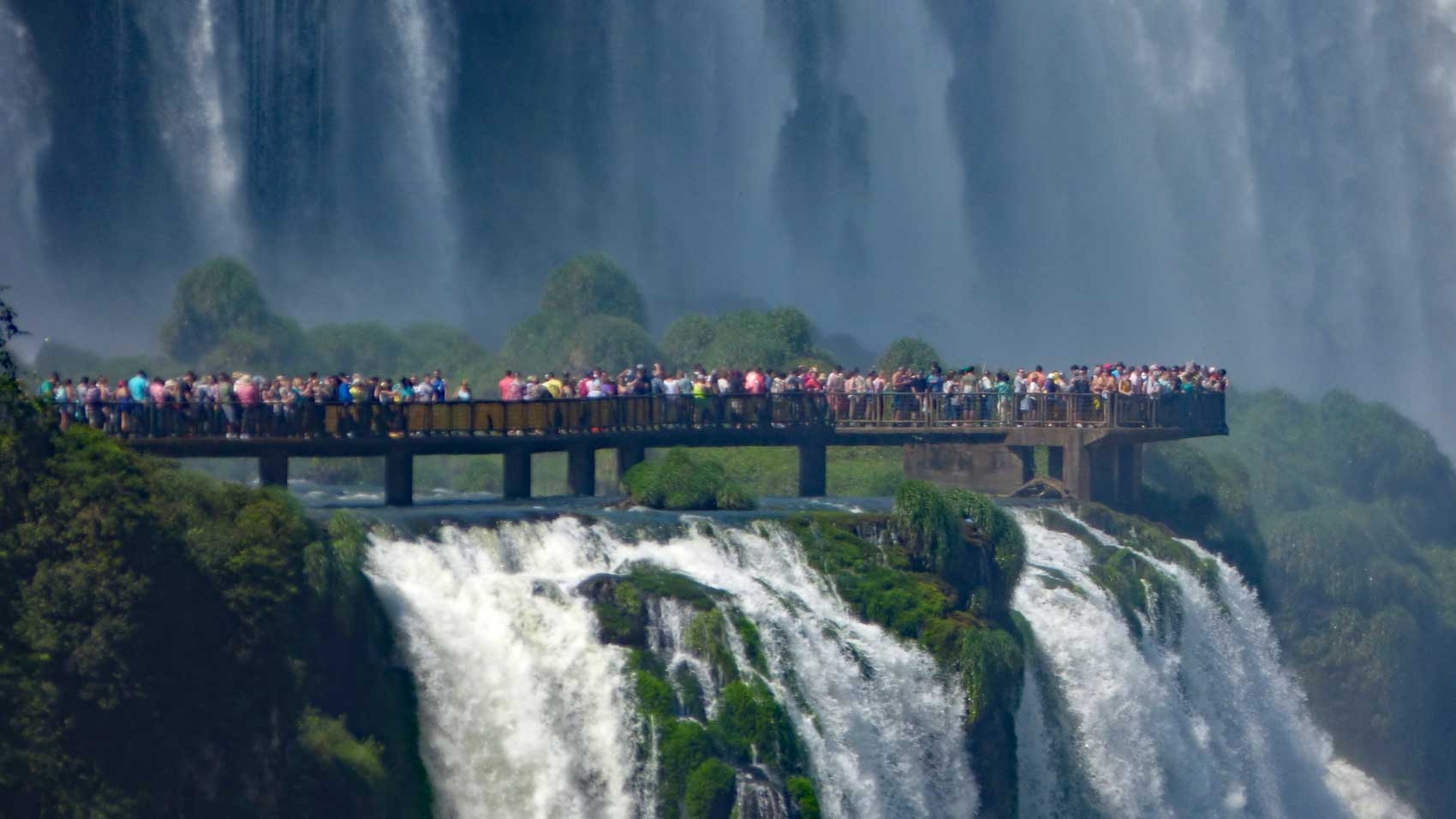 Virtual tours of waterfalls are in a league all their own. There’s something incredible about the thundering of massive amounts of water you can feel in your chest. The calm-inducing cascade over rocks. Virtual reality, or VR videos, and 360 tours take you THERE. You can look around and (almost) feel the mist in your face! 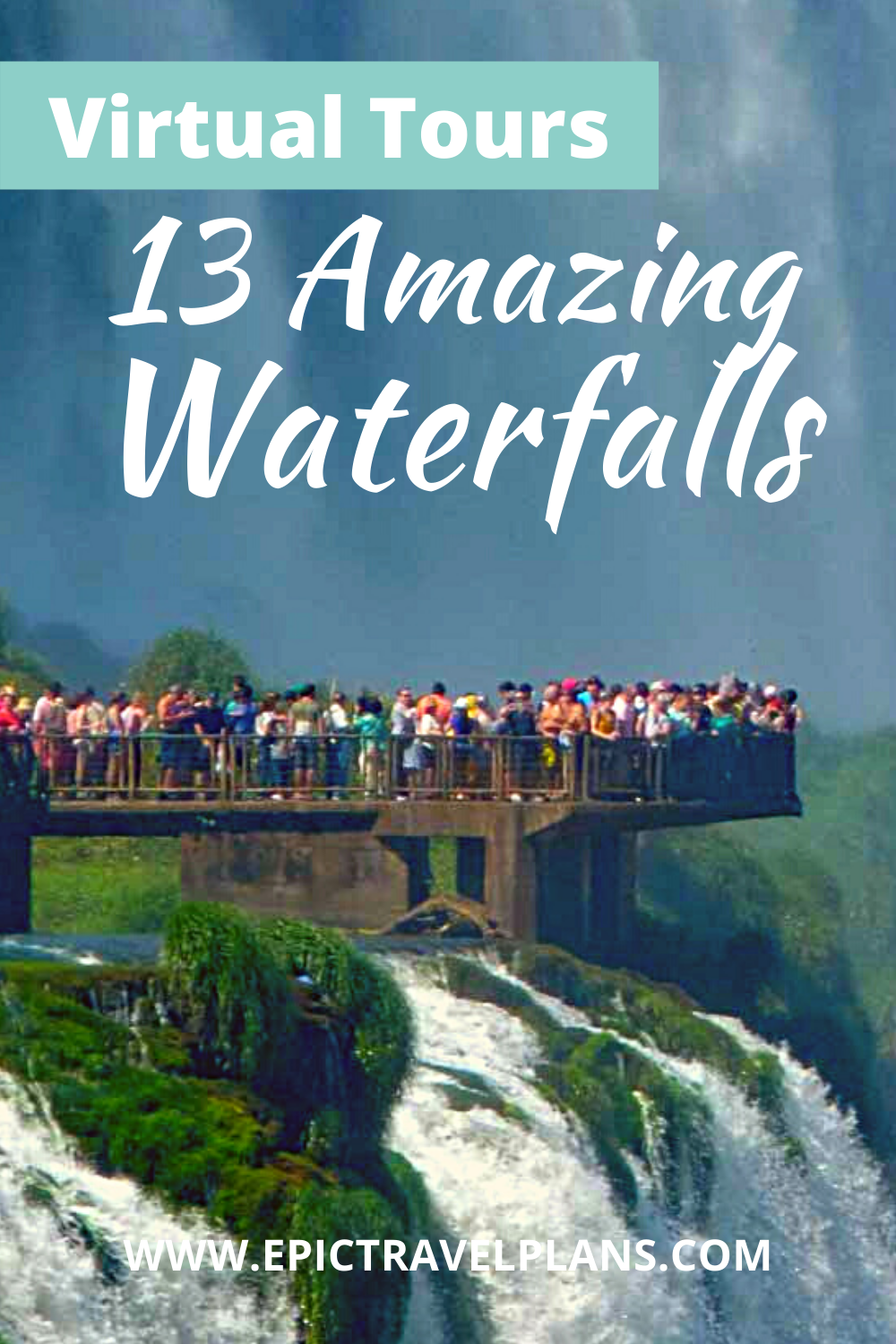 All of these virtual tours of waterfalls are INTERACTIVE. The super high-resolution 360 photos let you pan, pause and zoom in, while the 360 videos capture the sounds and rhythm of the environment. You can open 360 videos in your YouTube app and “look” around. (But I prefer full-screen on my husband’s big monitor!)

And if you have a VR headset, the 360 videos are even more immersive. Open them in your YouTube app, click on the VR video symbol to split the screen, and put on your VR headset. Here’s my YouTube playlist for all the 360 videos below. 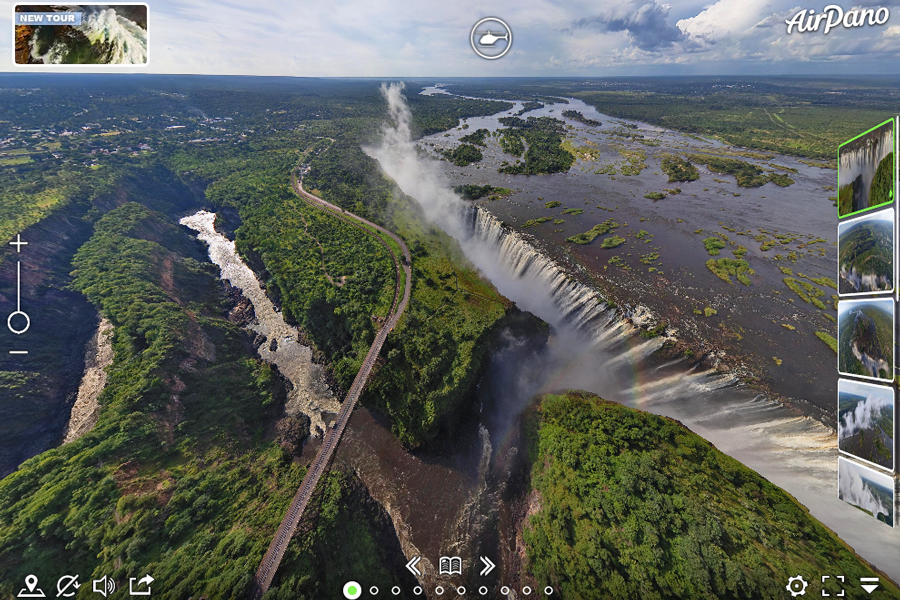 Let’s start this list of best virtual tours of waterfalls with this massive WOW experience. Victoria Falls of Africa is famous for being the largest waterfall in the world (in the wet season). It’s an incredible 1,708 metres wide (5,600 feet) and runs along the border of Zambia and Zimbabwe.

Adding to the drama of Victoria Falls is the flat landscape surrounding the Zambezi River before it thunders into the narrow gorge below. You can hear Victoria Falls from 40 kilometers/25 miles away! Then the water converges at the middle of the narrow gorge, and zig-zags through the countryside at the bottom of another narrow gorge. It’s absolutely amazing.

Be amazed yourself by taking this Victoria Falls virtual tour from AirPano! I link to the 360 photos, but just scroll to the bottom to get the 360 video. 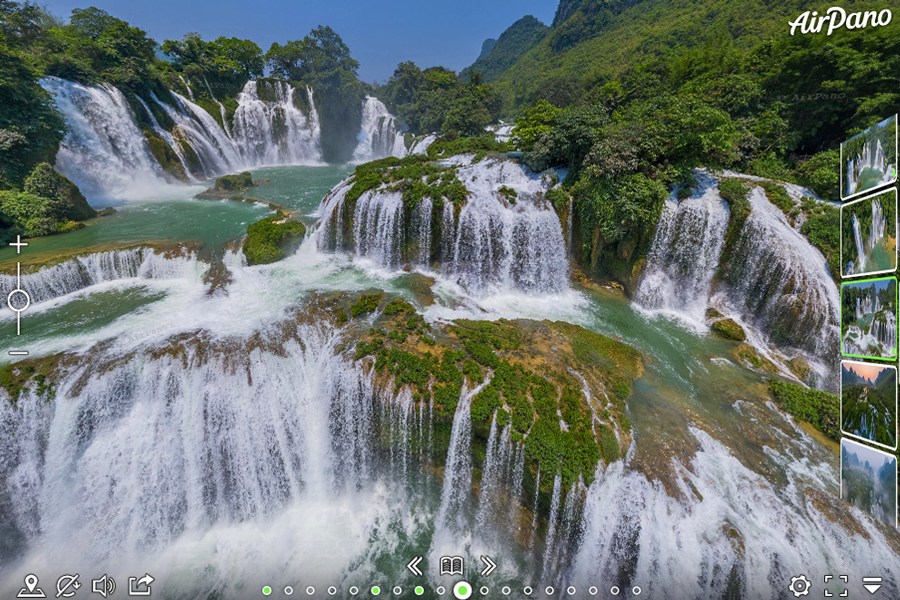 Along the border of Vietnam and China are the fascinating Ban Gioc Waterfall (Vietnam side) and Detian Falls (China side). These falls are gorgeous.

Ban Gioc Waterfall and Detian Falls are certainly among the most beautiful waterfalls in Southeast Asia. And Ban Gioc Waterfall is the largest waterfall in Vietnam. Between May and September, these two waterfalls become one massive waterfall 200 meters wide (660 feet). The combined height of three lovely drops is 60 meters (200 feet), and is surrounded by lush green jungle.

Check out this super pretty Ban Gioc Waterfall and Detian Falls virtual tour from AirPano. Scroll to the bottom for the 360 video. 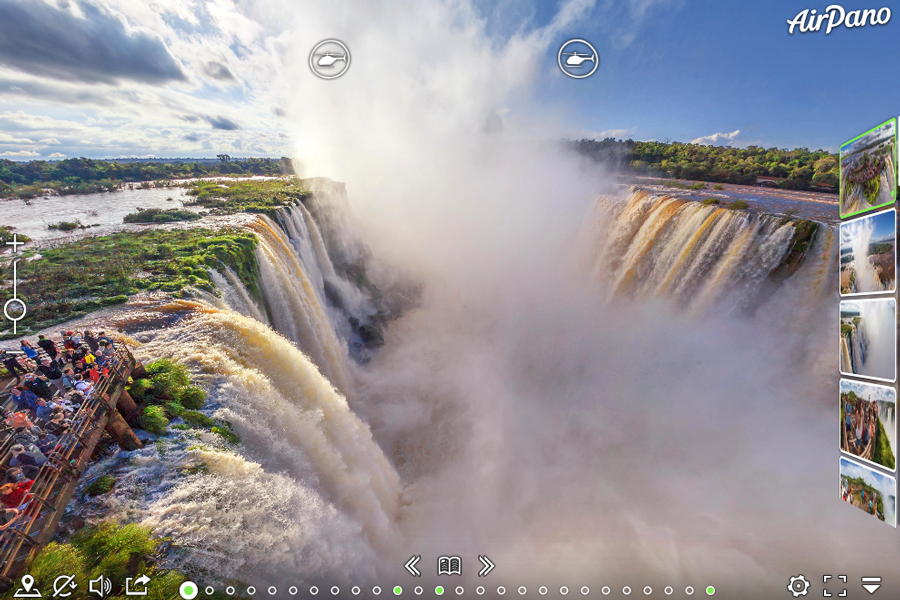 Are you ready to fall in love?! THESE waterfalls are AMAZING!! You can’t get any better than this for travel bucket list ideas!

Iguazu Falls is the largest waterfall system in South America, made up of 270 separate waterfalls. They run along the border of Argentina (the larger part of the waterfall) and Brazil (the smaller part). Despite being a shorter waterfall (up to 82 meters/270 feet), Iguazu Falls spans 2700 meters (8860 feet). Iguazu Falls is one of the most powerful waterfalls in the world.

And the incredible Iguazu Falls virtual tour from AirPano will take you there, “wow” moment and all! The largest of the 270 waterfalls is the horseshoe-shaped waterfall endearingly named “Devil’s Throat.” Just LOOK at those walkways crossing the huge width of Iguazu River and along the tumbling water! INCREDIBLE waterfalls in South America.

Love Iguazu Falls? Check out my crazy virtual tours to paramotor above them! 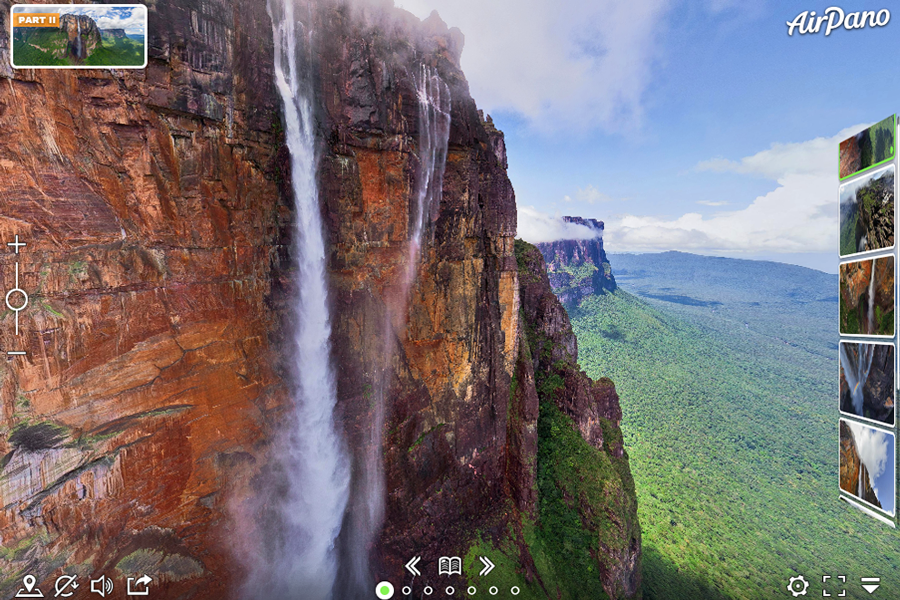 Angel Falls in Venezuela is famous for being the highest waterfall in South America and the WORLD (at 979 meters/3,212 feet). It plunges over the Auyan-tepui mountain at an incredible 807-meter drop (2,648 feet), and then flows along dramatic cascades and rapids. It’s surrounded by the tropical forest of Canaima National Park, accessible by boat.

Angel Falls is named after a pilot, Jimmie Angel, who discovered them in the 1930s. He spotted them on a flight over the area and returned in 1937 to investigate, surviving a crash-landing. Both Angel Falls and Canaima National Park are a UNESCO World Heritage site.

Check out this Angel Falls virtual tour from AirPano. The 360 photos are fantastic, but if you’re looking for 360 videos, just scroll to the bottom of the page. If you have trouble loading these large files, check them out on YouTube. 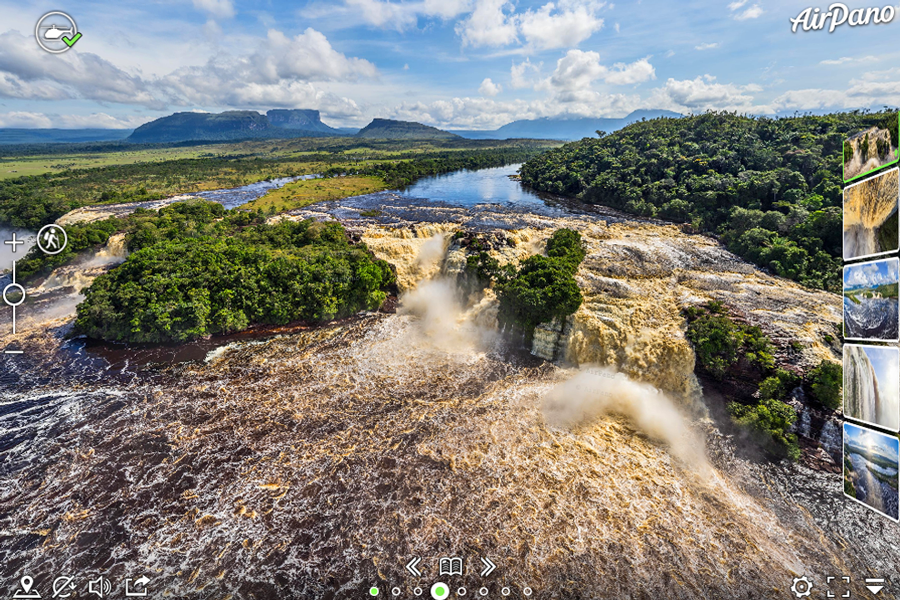 Here’s a very different waterfall virtual tour in Venezuela you have to check out. The Canaima Lagoon virtual tour gets you up-close-and-personal with the area’s waterfalls. Hear the thunder. Walk behind the waterfall. I LOVE it.

Canaima Lagoon is popular for its white sandy beaches and beautiful waterfalls. The most impressive waterfalls in Canaima Lagoon are Hacha Falls, Golondrina Falls and Ucaima Falls.

Here’s AirPano’s Canaima Lagoon virtual tour in 360 photo. Again, scroll to the bottom of the page for 360 videos, or open these up in your YouTube app: above Ucaima Falls and behind Hacha Falls.

Interested in getting a VR headset? Check out Google Cardboard … a cheap way to enjoy the view! 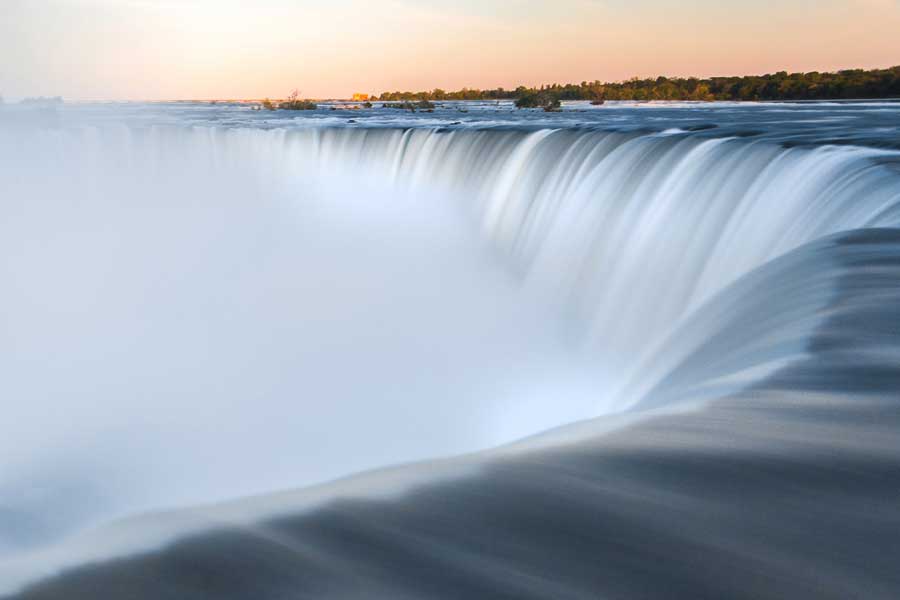 Niagara Falls is definitely a top travel destination for both Canada and the United States of America. This top tourist destination includes three waterfalls: Horseshoe Falls in Canada, which is the largest, and American Falls and Bridal Veil Falls in the USA. Niagara Falls are among the widest and largest waterfalls in the world, but they’re only 53 meters high (174 feet). But don’t worry: these Niagara Falls 360 views will definitely leave you impressed!

Here are the official tourism virtual tours of Niagara Falls, both in 360 videos compatible with a VR headset: Canada side and the USA side. Both of these Niagara Falls 360 views take you through from a tourist’s perspective. And the USA Niagara Falls virtual tour includes the helicopter and jet boat upgrades! 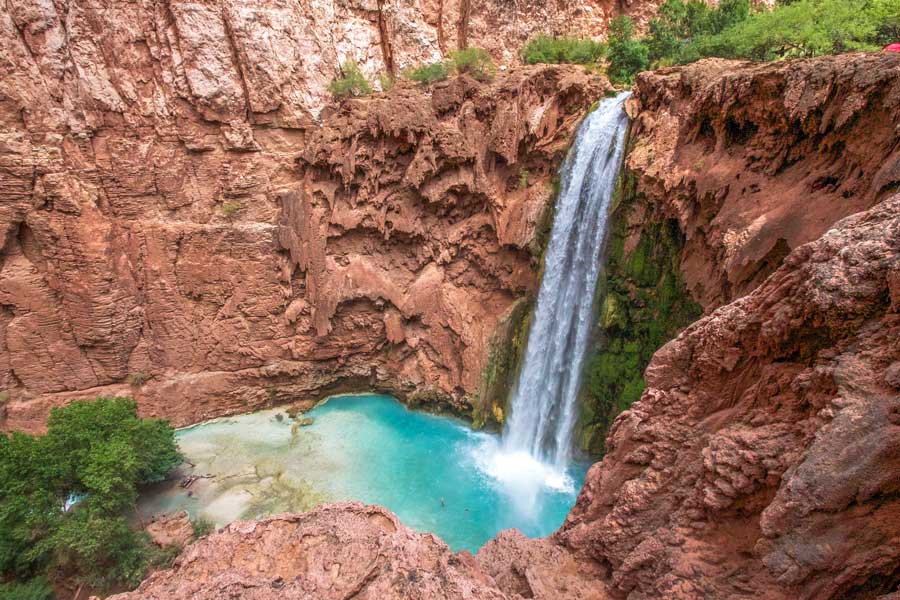 Havasu Canyon is famous for its stunning sculptured red rock and … you guessed it, waterfalls. It’s located in western Grand Canyon.

Flowing through Havasu Canyon is a brilliant turquoise stream with many waterfalls and cascades to explore. The most popular are the Upper and Lower Navajo Falls, Havasu Falls, Mooney Falls and Beaver Falls. The most dramatic (to get to, at least) is Mooney Falls, with a crazy descent through caves and chain ladders.

There are quite a few traveller 360 videos of Havasu Canyon. I like this virtual tour of Mooney Falls from Base Camp Vegas; you see this gorgeous area from the canyon floor, the crazy climb out, and then from above.

Two other 360 videos to check out are from B Davey: descent to Mooney Falls and view over the edge. Awesome!

Love the canyons of Arizona and Utah? Check out my 2-day Epic Canyon Road Trip! Or, compare hikes in the gorgeous Antelope Canyon.

I stumbled upon this little gem of a waterfall virtual tour from Scojo in 360. This Dillon Falls virtual tour is from Oregon, with terrific close-up shots as well as inspiring views from above the waterfall.

Dillon Falls looks so humble, but it’s a dramatic little waterfall. It starts with a 15-foot drop (4.6 meters), becomes a series of steep and violent class-5 rapids, and finishes as class 2 and 3 rapids. Adding to its charm are lava islands. Dillon Falls is along the Deschutes River of the Deschutes National Forest. 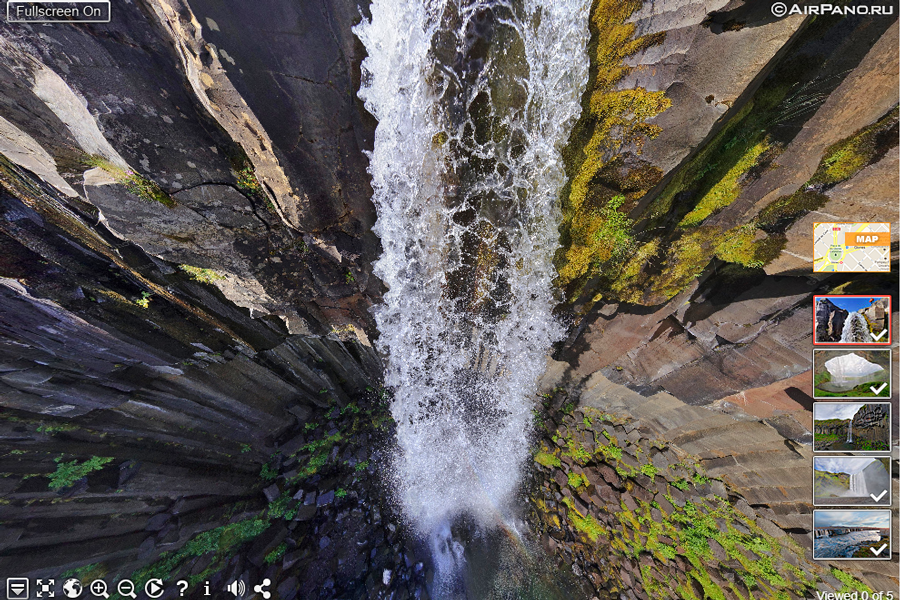 Iceland has SO MANY beautiful waterfalls! Svartifoss, also known as Black Falls, is not one of the highest at only 20 meters (65 feet), but it’s one of the most fascinating.

Svartifoss is famous for the dark lava basalt columns of the surrounding crescent-shaped cliff. These are the same kind of hexagonal columns found along Northern Ireland’s famous Giant’s Causeway. Many of the columns have broken off mid-way, so they look like they’re floating. Some say it resembles a massive pipe organ, and you can see why! And the broken pieces at the bottom add to the area’s mystique.

This stunning landscape inspired the architecture design of Hallgrímskirkja church in Reykjavík and the ceiling of the Icelandic National Theatre. Svartifoss is in the lush green area of Skaftafell Nature Reserve, inside Vatnajökull National Park.

Check it out for yourself in this Svartifoss Falls virtual tour. This page is part of AirPano’s collection of eight super beautiful waterfalls in Iceland. 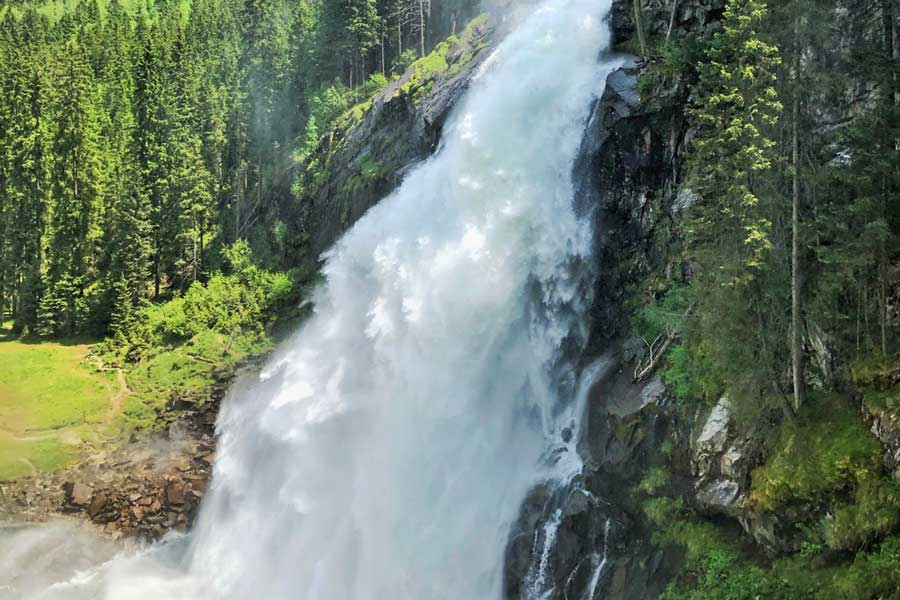 This Krimml Waterfall virtual tour by Urlaub in Österreich takes you along the glacial stream to upper falls. Just listen to the thunder of the 140-meter (460-foot) drop! Pan around the 360 video and just imagine being in this breathtaking setting. It’s too bad this video doesn’t capture the other two major drops: 100 meters in the middle and another 140 meters at the bottom. 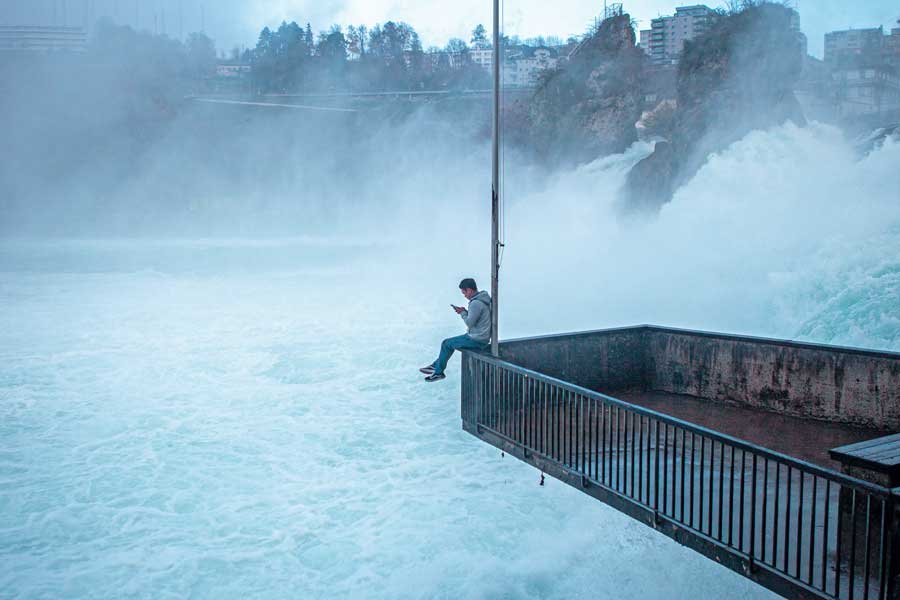 Now we head west to Switzerland and the most powerful waterfall in Europe. The Rhine Falls is famous for being the largest plains waterfall in Europe at 150 meters wide (490 feet) and 23 meters high (75 feet). The falls are located on the High Rhine near the town of Schaffhausen.

This Rhine Falls virtual tour from Vr360degreesvideos is pretty fun. It takes you to the edge of the waterfalls, on a boat ride along the mighty High Rhine, and to a rock right in the middle of the Rhine Falls.

2 Best Virtual Tours of Waterfalls in Australia and New Zealand 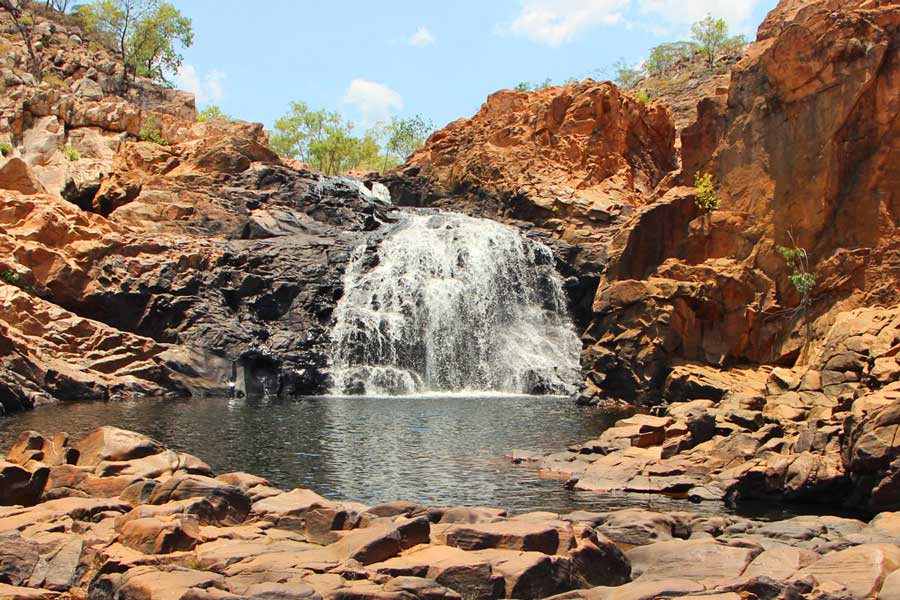 Take an aerial virtual tour through the sandstone cliffs of Nitmiluk National Park in Australia’s Northern Territory. This waterfall virtual tour from Australia starts at the lovely Biddlecombe Cascade and ends at Edith Falls. Edith Falls is a series of cascades and pools, ranging between 8.7–12 metres (29–39 ft).

I love the simplicity of this waterfall virtual tour. If you just want to feel like you’re sitting on the rocks, surrounded by all the sounds and fresh air of nature, this will transport you there.

This Fantail Falls virtual tour from Galaxiid takes you to the lushous Mount Aspiring National Park in New Zealand. Fantail Falls is 23 meters high (75 feet), and flows over rock steps into the super clear Haast River. And you don’t have to worry about wading through the fast-flowing river or swatting at the sandflies. Enjoy!

Which of these best virtual tours of waterfalls is YOUR favorite? The thundering Victoria Falls or Iguazu Falls? The elegant Angel Falls or Detian Falls, or intriguing Svartifoss Waterfall? Or maybe one of the more “humble” waterfalls on this list?

If you want more incredible virtual tours and VR videos, check out these three YouTube channels:

Interested in getting a VR headset? If you’re into gaming or want a good one, reviewers praise the Oculus brand. Otherwise, you CAN get a cheap VR headset. Just check out Google Cardboard! 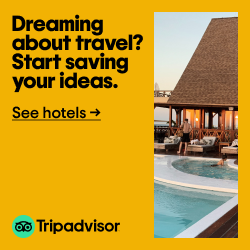 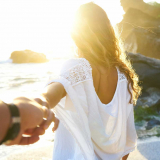 Looking for the best romantic getaways to Florida USA? Here ... 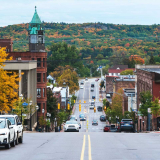 Here are the BEST Michigan romantic getaways, with cabins, ... 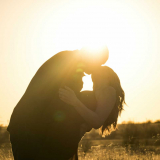 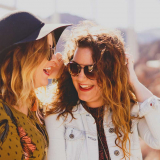 If you’re looking for CUTE travel accessories for women who ... 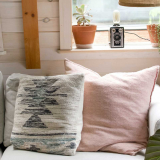 Wondering what to buy someone who has a cabin? Here are the ... 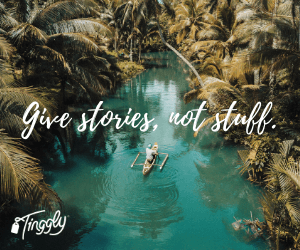 Find your Campspot. Choose from 100,000+ campsites and use personalized search tools to discover new places.